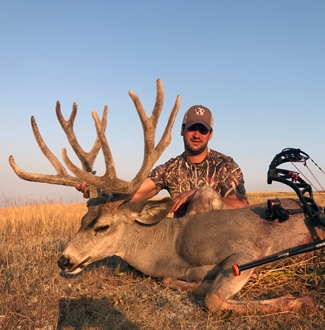 The 2017 had an amazing start! Carl Rossi on his 6th straight bowhunt with us connect on a 199” giant on the second day of his hunt. Carl’s friends, Al, Wayne, John and Bernie were also hunting the same week. Wayne harvested a 175” buck, his best deer to date in the three bowhunts with us. Bernie took his first mule deer buck, a cool looking, non typical character deer that also taped over 170”. Al and John both had opportunities at good bucks but each had taken exceptional bucks with us in the past and were not able to close the distance on the deer they were looking for. They both will be back in 2018 to give it another try!

After our sheep hunts we ran another group of bowhunters in mid October. Brothers Mark and Brian Hess as well as Frank Dean and his friend Earl Cummings joined us. All four hunters had shots at good bucks but at the end of the hunt it was just Mark and Frank that were able to put their tag on a nice mature buck each.

Bowhunting for big mule deer has been one of our most popular hunts these days and our next available opening is for October 2019.