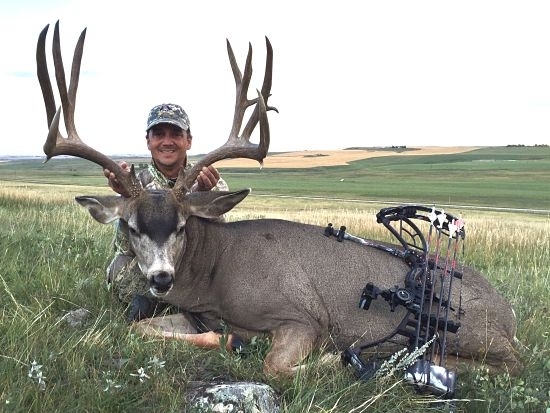 This year was like the perfect storm, a real mild winter and good moisture in the spring and summer at the right times. We found many mature bucks during the summer that we were fortunate to harvest throughout the bow and rifle season.!

We took 10 archery hunters this fall, 7 of them had hunted with us at some point in the past. Carl Rossi on his fifth bowhunt with us and took a dandy typical four point on day four of his hunt. This buck made Carl’s fifth buck in five bowhunts with us. Pretty awesome success rate which is a direct result of dedicated practice on Carl’s behalf. Carl’s good friend John D’Angelo came up for his second hunt with us and tagged out on a 191” non typical giant on day two of his hunt. Carl’s other two friends, Al Ciprano and Wayne Birster also were successful in taking mature deer on day two making it a three deer day for us. Something that does not happen to often in an archery camp!

Other successful hunters were Doug Wilson taking his first mule deer with a bow on the first day of his hunt. Bill German had taken a few nice mule deer in the past with his bow and on day three of his hunt with us he harvested his best mule deer buck to date. Mitch Mitchum on his second bowhunt with us was the lucky guy of the season when he took an absolute brute of a buck that stretched the tape at 198”! Amazing!

It was another unbelievable bow season with 8 out of our 10 hunters harvesting bucks which had a combined average score of 181”! A big part of our success on these bow hunts lately have been the dedicated archers that have come and are able to get the job done. Also the skills and knowledge of our guides that can consistently get our clients in the right spot for a shot opportunity. Thanks goes out to our guides for the bow season; Jason Wilson, Wyatt Barrett, Chase Keeley and Kelly Wiebe.