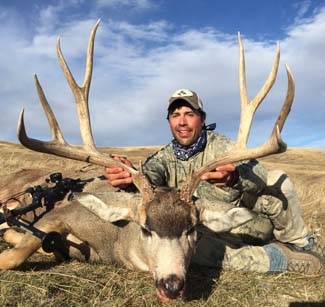 This year has been by far the best year we have seen for antler growth. A combination of the mule deer being on draw for Alberta resident hunters, a mild winter and good moisture at the right times this spring and summer have provided the ideal situation for these mature bucks to flourish. As always we spent many hours scouting during the summer to find the largest bucks in our area for our clients to hunt. The returns of this time invested resulted in our bowhunters harvesting some huge bucks!

We kicked off the archery mule deer season with first time hunter Danny Edmonds (NJ) arrowing a giant 191" on the first day of his hunt. This deer was an absolute giant and grew in size when seen up close. This was Danny's largest mule deer by far and made another one of our hunters addicted to spot and stalk mule deer hunting with a bow. Danny will be back again next year to try his luck again! Brad Gray (MI) has hunted with us a half dozen times and was back with us for another bowhunt. Brad harvested his first mule deer with a bow in 2014 and enjoyed it so much he came back to try again this year. Brad has something about getting the most out of his hunt, and like last year waited until the last day to take his buck, a dandy that taped out at 161"!

Carl Rossi (PA), on his fourth bowhunt with us in as many years, had been spreading the word on the great bowhunt we provide and brought a group of three other hunters with him. Carl's good friend John D'Angelo (PA) came out on his first western hunt. On the second day of his hunt John made a great shot on a cool looking buck that had a bunch of trash that totalled up to a surprising 182"! Not bad for your first mule deer. With John tagged out we had the rest of the hunt to find a good buck for Carl. On day four we were experiencing some really nasty weather but that did not stop us from looking and it was good that we were out there. We surprised a great buck in a coulee that escaped into a barley field. Carl endured some rain and freezing temperatures and gritted it out to harvest the largest deer of his life with a great 54 yard shot. This buck was an absolute giant and taped out at 203"!

My brother Hans was guiding Al Ceprano (PA), who has taken a couple nice bucks with us in the past two years, and Wayne Birster (PA) on his first hunt with us. Both Wayne and Al had some bad luck missing the same buck that we would later harvest that scored over 190". Wayne also had a couple shots at another buck over 180" but it was not meant to be and both Wayne and Al went home empty handed but will be back again next year to try again! That is how bowhunting goes sometimes. Dreabon Joiner (TX) and friend Don Williams (LA) had an amazing hunt with us. On day three Don was able to harvest the buck that was missed a couple of times earlier in the season, this buck had amazing brow tines and some trash and taped out at 191"! On day four Dreabon arrowed another buck we had been watching, a nice typical that scored 177". Juan Rodriguez Cerrillo (MX) had hunted elsewhere in Alberta a few years ago for mule deer but was unable to connect on one. Juan came on a hunt with us and after one missed shot it was time to go home and the mule deer jinx continued for him.

This year I had an archery only tag and after all our bowhunters were gone I got a few days to hunt for myself. This does not happen too much for me this time of year but fortunately I was able to take a nice 180" typical with a 57 yard shot.

This will be an archery season for the books! All our bowhunters took one or more shots with a 66% harvest rate and the average score on the archery bucks harvested was an incredible 184"!